Much to be proud of from my chosen city. If you’ve never experienced Melbourne, you may be surprised by its history. And no, it’s not Gotham. 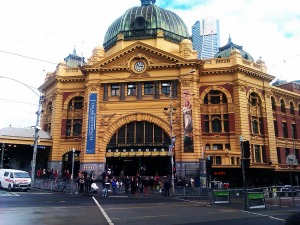 Happy birthday, Melbourne – 180 years old tomorrow! And perhaps, let’s be honest, not entirely sure what anniversary it is you’re celebrating.

It’s been a fascinating three weeks watching the Bronwyn Bishop farce unfold. And the longer it went, the more – ahem – questionable use of taxpayer funds for pollie perks have emerged. She sure likes helicopters, doesn’t she?

The news came yesterday that Abbott finally acted and gave her the boot, allegedly, – ahem – she resigned. But just from the speaker’s chair. She’s still in Parliament as the Member for Mackeller. She will still have access to those entitlements, only she won’t have it so easy to say she’s going on specific Parliamentary business, which she wasn’t able to back up with paperwork anyway. So in reality, nothing much has changed. Maybe a bit of a cut to her pay packet, but she’s set for life with the rest of her benefits provided by tax-payers.

And to think – this woman was once trotted out as potentially the first female Prime Minister! Think about that for a second.

Glad she’s gone (at least from such a biased seat). Abbott’s next, right? Pleeeeeese!!!